I didn’t get my first cell phone until 2001.  It was one of those walkie talkie-like push-to-talk phones that were popular around that time — a chunk of black and gray plastic, a numeric keypad with a “talk” button, and a tiny little screen that didn’t do much more than display the number being dialed.  It took me a long time to even accept that I needed one, but my wife convinced me that it would be good to be able to reach each other during the day when we were out and about.  I don’t think I used it to call anyone but her.

Flash forward almost fifteen years, and I can’t imagine life without the little device in my pocket – the smartphone, a gee-whiz piece of technology more powerful than my first computer in college and with access to the entirety of human knowledge and experience via the internet.  Its existence was almost unthinkable when I was a child, now unavoidable for my kids.  It’s (relatively) cheap, convenient, and ubiquitous, offering up news, videos, sports, games, and a thousand other ways to be plugged in.  And it offers a personal gateway to what experts have termed the attention economy, where content is king and the consumption of information is the ultimate end goal.

Are you guilty of “Pphubbing”?

Having such easy access to all of that information might not necessarily be a good thing for your relationships, however.  A study conducted by Baylor University’s Hankamer School of Business suggests that adults who are distracted from their relationship partners by their cell phones do damage to the underlying relationship, and that the behavior leads to noticeably higher levels of depression and dissatisfaction.  The researchers labeled the behavior “Pphubbing”, or partner phone snubbing – constantly checking for new text messages, scanning Facebook during dinner, reading Twitter during lulls in a conversation.  They found that the more couples experienced Pphubbing, the lower they reported their levels of satisfaction with each other.

It isn’t limited to significant others, either.  Parents can just as easily tune out their children in favor of YouTube or Instagram, leaving their children to feel neglected and disconnected.  Though it’s debatable whether parents should be fully and completely engaged with their children every second of every day, there’s no question that the sight of a parent checking their phone while their child runs through the park or sits beside them in a restaurant has become shorthand for “inattentive and detached parenting”.

It’s something to be cognizant of for the family going through a divorce.  Though the conclusion sounds obvious, the Baylor study gives more solid evidence that diverted attention leads to real emotional and psychological damage in a relationship.  It’s not much of a stretch to conclude that applies to children as well.  It can be very easy for parents struggling with the emotional toll of divorce to lose themselves in the comforting world of their smartphones, but such behavior might have a real impact on their children, and in turn have a real impact on parenting orders or arrangements made by the court.  A child’s relationship with a parent is one of the factors the court must consider, and kids who have negative interactions with or feel neglected by their parent in favor of a smartphone might not end up spending as much time with that parent, post-divorce. 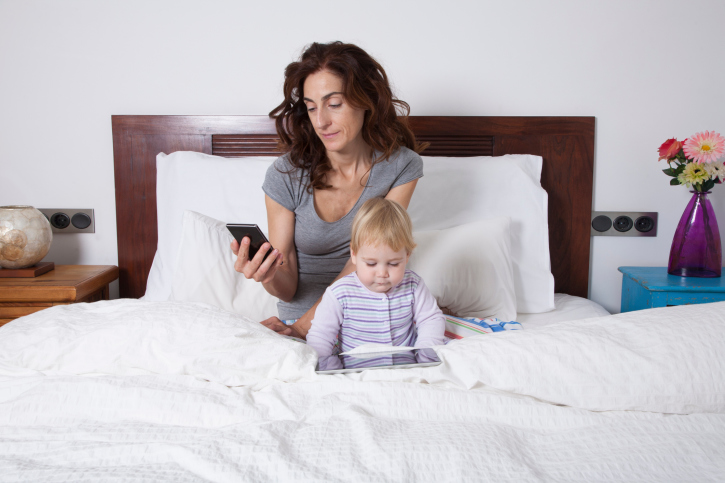 Smartphones aren’t a fad, and they’re not going anywhere.  The attention economy is here to stay.  As flashing devices and content creators increasingly compete for our eyeballs, it’s important to remember how spending that attention affects our familial relationships – because the court will.

If you’re considering divorce, we’re here to help. Learn more about Gus Dahlberg‘s experience and get in touch today to schedule a consultation.