Five (or more) signs your marriage might be over

Brought to you by Columbus divorce lawyers Babbitt & Dahlberg

No one goes into a marriage thinking it’ll eventually end in divorce. OK, almost no one. If you met your future spouse on a reality show, that might not bode well, and you probably suspect as much.

But for most couples, it’s “’til death do us part” from the start. Our nation’s high divorce rate might actually be lower than suspected. (If you’re looking to beat the odds, such as they are, check out this infographic we put together with some great advice for keeping your marriage intact.)

If you’re reading this, though, something might be up. Maybe you have your suspicions but you’re looking for confirmation. Or maybe you and your partner have already discussed a separation or divorce, but haven’t moved forward with either yet.

Here are some common signs we see in couples divorcing. If you find yourself nodding along silently to more than a few of these signs, perhaps it’s time to speak to a divorce lawyer.

Yeah, this is an obvious one, but we’re going to get a little more specific.

If you’re spouse has cheated and shows no remorse over the betrayal, that’s not good. Likewise if your spouse cheats and refuses to cut off contact with the person he or she cheated on you with, said attorney Jay Babbitt.

Your spouse might say, “Well, we work in the same building and occasionally I run into her,” or, “We go to the same meetings.”

“That’s a bad sign,” Jay said. “The only way the spouse is going to get over the betrayal is if he or she is confident that they aren’t going to have any contact whatsoever.”

Your spouse might legitimately work late sometimes, but if new patterns develop, it could be a bad sign, Jay said.

Likewise, if you and your wife previously allowed each other to look at the other’s phone, emails and text messages, but won’t anymore, that’s a big red flag.

Other changes in behavior to look for include the withdrawal of touching and the sharing of stories, in addition to a lack of listening and caring.

“Basically, if the behavior is different from what they’ve always done, that’s a problem,” Jay said.

Or maybe the two of you have changed in more fundamental ways. Are your life goals still the same? What about moral and ethical values? 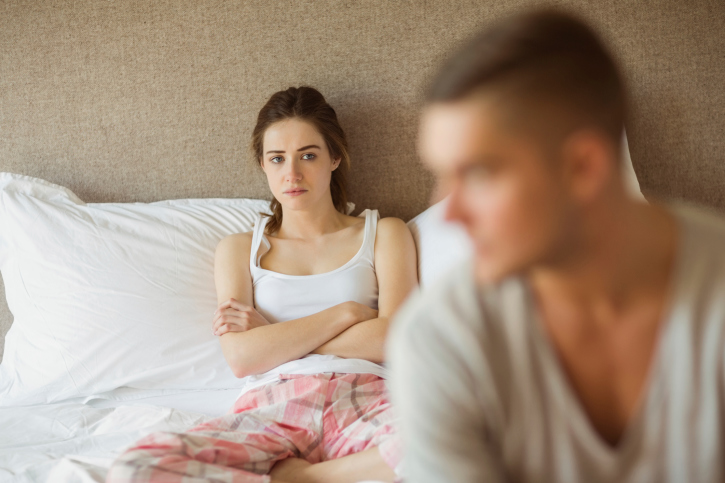 Of course, it should go without saying that you probably shouldn’t marry someone and hope they change afterwards. But sometimes problems arise that need to be addressed — and then that never happens.

Maybe your wife or husband has an addiction that’s gone untreated, or you’ve been in therapy, as a couple or individually, in the hopes of addressing some problem area, only progress has definitely stalled. When there’s no forward progress in a relationship, it can be a sign of bigger problems.

Sex ain’t what it used to be

Sure, this is another expected sign, but it’s also one that’s easy to overlook. There could be legitimate reasons why someone might lose a desire for sex in a relationship. If not, though, be wary, particularly if it’s the man who’s lost interest, Jay said.

“I see it less with women,” Jay said. “With guys, unless it’s an age or health issue, it’s a big red flag.”

Similarly, if the quality of sex has changed dramatically – where a traditionally passionate relationship has become boring and mechanical — it could be a sign a spouse has checked out of the relationship.

Your relationship has become toxic

Maybe you fight the “wrong” way, where the bad times far outweigh the good. Perhaps you’ve started fantasizing consistently about a life without your spouse, or you rarely communicate. That kind of toxic and heated back and forth could be a big warning sign about the health of your marriage.

It could be time, so to speak

Anecdotally, Jay said, there are spikes in divorce at certain points in a marriage: after the first three years, then again at years seven and eleven, and then at fifteen and twenty-five.

Divorce often happens after three years of marriage, Jay said, because by then the endorphins from the new relationship have likely worn out. “Now it’s not a relationship, it’s just life,” Jay said.

The rest of the spikes can be traced to various life milestones, such as children going to school or leaving for college.

The point is that marriages do end, and they can end for a variety of reasons. At Babbitt & Dahlberg, we’re here to help. Our Ohio divorce attorneys have more than 45 years of combined experience, plus national recognition by organizations such as Best Lawyers in America, the Academy of Matrimonial Lawyers (AAML) and Super Lawyers. Get in touch with our team today.